Well, it’s pretty much exactly what it sounds like! Using special types of microphones and cameras you can record audio and video from all directions, at once. Surround Sound recording has of course been around for a long time but the ability to record matching 360 video is quite new. Perhaps the most familiar example of this is the Streetview mode of Google Maps, however, now this type of technology is being used to create 360 video as well as still images, and many new 360 cameras and recorders are starting to emerge. This includes both highly expensive camera rigs intended for film production, but also much more affordable devices too (expect this to built into many smartphones in coming years, although the question of where to put the selfie stick in a 360 image is yet to be resolved!).

The development of most of this new hardware is being driven by the emergence or perhaps more accurately the re-emergence of virtual reality (VR) in the past few years. While lots of fancy new VR headsets are set for release over the coming year, Google’s cheap but surprisingly effective Cardboard headset has sparked a lot of interest, particularly for 360 video (as distinct from VR gaming).Although little more than folded cardboard and some plastic lenses (and requires a pretty high-spec smartphone), this cheap viewer can be surprisingly effective and certainly whets the appetite for the more sophisticated developments to come (the Paul McCartney live performance by JAUNT is well worth a look, as are the most recent Google Jump demos). 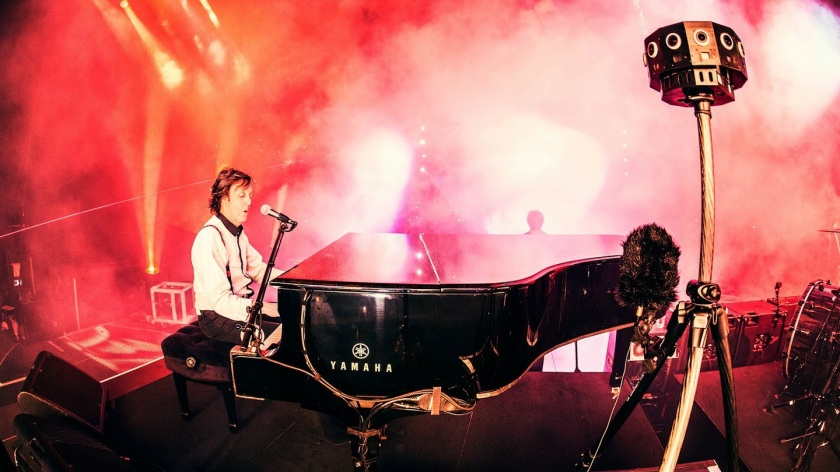 Of course, as is often the case, the development of the audio side of things has lagged behind somewhat and many of the current demos do not actually contain matching 360 audio (the Paul McCartney track is a notable exception). While the basic technology to create 360 audio has been around for decades, the precise way in which this material is recorded, produced and delivered for VR applications is still very much in a state of flux. Such a state is good news for researchers of course, and later posts will look in detail at some of our work in this area here in Trinity.

All of these technological developments should be of particular interest to composers of spatial music, as this new form of media lends itself very well to this type of music. In fact, you could argue (and I will!) that traditional concert presentations with all of the musicians clustered in front is very unsuitable for VR (how many times do you really want to turn around and look at the audience?). In contrast, a work of spatial music in which the musicians are placed all around the audience is very well suited to this type of presentation in which the viewer can look around at will. In fact, many composers of spatial music have seated the audience in spiral or circular patterns to deliberately remove any emphasis on one direction over another (VR is perhaps even better in this regard as the viewer is not physically tied to a seat, or at least a ‘virtual’ seat anyway!). 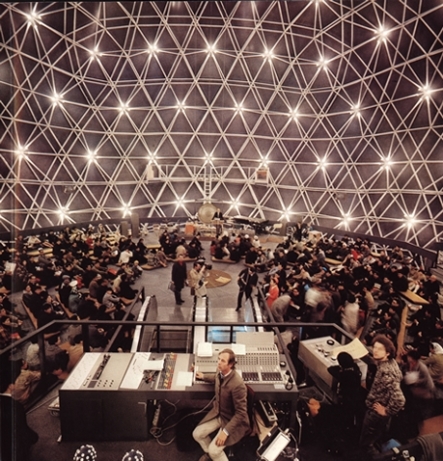 This deliberate encouragement of different perspectives and viewpoints is a fundamental and indeed unavoidable aspect of spatial music which is very well matched to a virtual reality presentation (telling a story in VR is in contrast much more challenging).

So, given all of that, if we had a 360 camera and microphone rig, and we also had some 35 odd musicians, eight loudspeakers, a very large bell tower and a big open space to put them all in, what kind of spatial music can we create?

Well, that is the question, and an ongoing one! In later posts we’ll look at the logistics (which are many, and complex!) and setup of the orchestra for this piece, and we’ll talk about some of the music too (a little Henry Brant, and perhaps some spectral music too!). 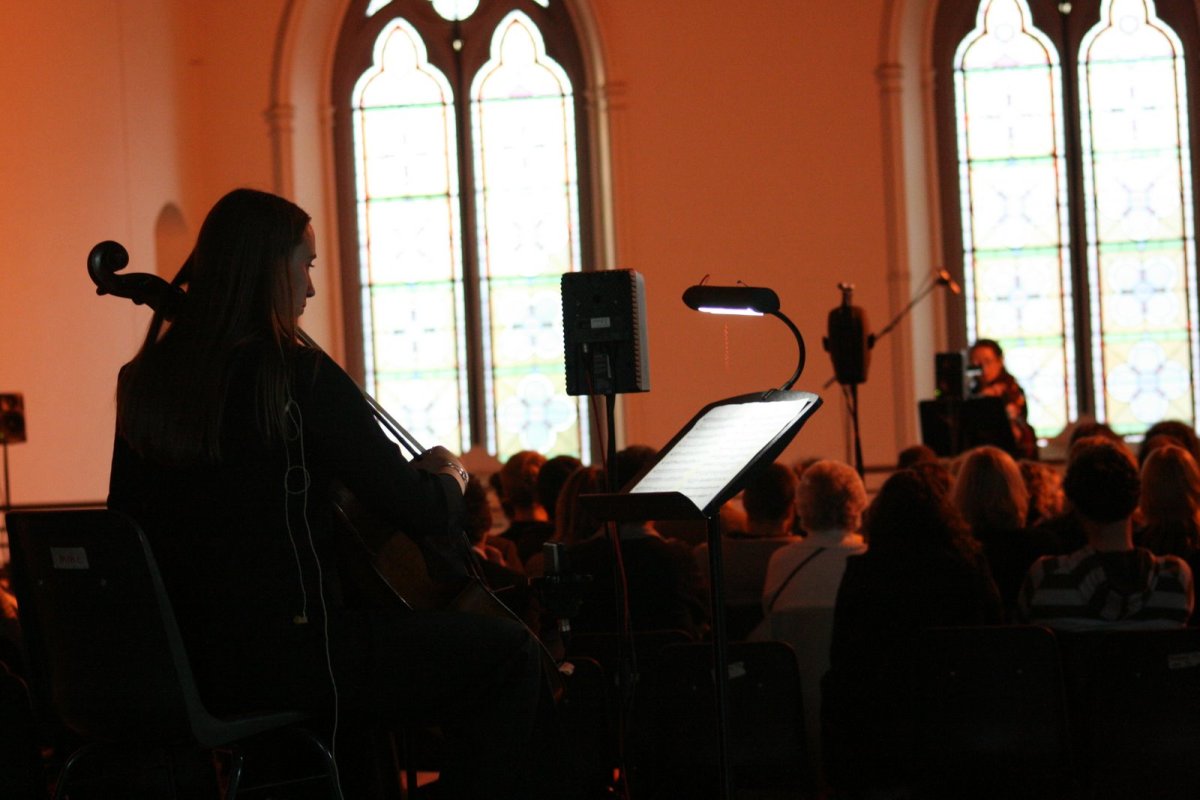 Spatial music is simply any form of music in which the placement or movement of sounds in space is a composed aspect of the work. While it is often associated with the development of electronic and electroacoustic music in the 20th century, spatial music is in fact much older. Call and-response patterns can be found throughout history in many different cultures and musical traditions, and this is of course by definition a rudimentary form of spatial music. In Europe, the antiphonal call-and-response of medieval church music developed into the increasingly elaborate polyphonic choral music of composers such as Adrian Willaert, Andrea and Giovanni Gabrieli, and Orazio Benevoli. One notable example of this type of spatial music is Thomas Tallis’ Spem in Alium, which was composed in c. 1570 for forty separate vocal parts divided among eight choirs (the Spatial Music Collective had lots of fun creating an electronic realization of this piece for eight loudspeakers at the 2009 Dublin Electronic Arts Festival!).

In the twentieth century, composers such as Charles Ives, Henry Brant and Karlheinz Stockhausen composed numerous works of spatial music involving multiple orchestras (Charles Ives – The Unanswered Question (1908), Karlheinz Stockhausen – Gruppen (1955-57)), large numbers of loudspeakers (Iannis Xenakis – Hibiki-hana-ma (1970)), and in one case, the entire city center of Amsterdam (Henry Brant – Fire on the Amstel (1984)). So what exactly is it that motivated these different composers to write this type of music?

Well, one of the advantages of spatially separating different groups of musicians or loudspeakers is that multiple, independent lines or musical layers can be more easily perceived and followed. Composers such as Charles Ives, Henry Brant and Karlheinz Stockhausen often used a spatial distribution of musicians or loudspeakers to facilitate both the performance and the audience’s perception of music containing many, simultaneous and complex layers of independent and sometimes quite dissonant material (described beautifully by John Cage as the “co-existence of dissimilars”). Of course this spatial separation is a practical necessity when musicians are performing entirely independent material at different tempos and in different keys, and these practical performance issues are another important aspect of this type of music (something which this blog will return to at a later date).

For electronic music, the use of more than two loudspeakers is also beneficial in all sorts of ways. Surrounding the listener with loudspeakers allows you to put the listener inside a recorded or synthesized sound scene in a way which cannot be easily achieved using simple stereo. In addition, the ability to dynamically move sounds around the listening space can be a hugely expressive aspect of electronic music, and can provide a really strong sense of physicality and gesture in the invisible or acousmatic music for loudspeakers alone. I can still remember the first time I encountered this type of music and being immediately struck by just how different this was to the electronic music I had encountered before. It’s been a source of fascination ever since and the focus of much of my work since both as a composer and academic.

So spatial music is definitely not a new idea, however, what is new is the ability to record matching audio and video from all directions using 360 audio/video hardware, and virtual reality. Something which we’ll look at in the next post!

This blog will document the composition, production and recording of a new, large-scale work of spatial music, which will be performed in the front square of Trinity College Dublin in April 2016. Trinity 360 is the working title for this project, which encompasses both the spatial music performance, and the resulting 360 video and audio recording of the concert.

Although I have composed and performed lots of spatial music, opportunities to write and perform such a large scale, site-specific orchestral work don’t come along that often. So I’m hugely grateful for the support of the Trinity Creative initiative in realising this exciting new project, and very much look forward to working with some of the many performing groups associated with Trinity College Dublin such as Trinity Orchestra, Cue Saxophone Quartet, and the Spatial Music Collective, and exploring the sounds of the university campus and the city that surrounds it

Over the next few months, I will be posting about the ongoing composition of this new work, and the technical research we’re conducting here in Trinity on 360 audio and virtual reality. So if you’re interested in orchestral and electroacoustic spatial music, a spectral view of the bells of Trinity’s Campanile, 360 cameras and microphones, or the history of Trinity’s often complex relationship with Dublin city, check back here in the coming weeks. 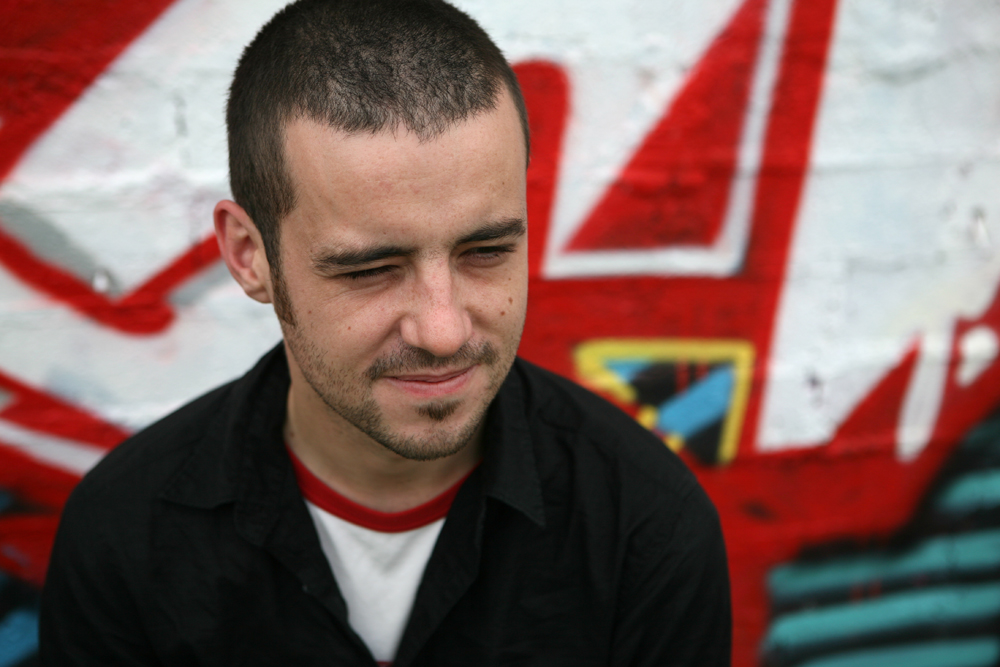 Enda Bates is a composer, musician, producer and academic at Trinity College Dublin where he lectures on the Music & Media Technologies Programme. His music has been performed by, among others, the Crash Ensemble, the RTÉ National Symphony Orchestra, Chamber Choir Ireland, Anne La Berge, Concorde, Trio Scordatura, Mise-en ensemble, Kate Ellis, Darragh Morgan, the Doelen Quartet, and New Dublin Voices. He has received various commissions and awards including at the 37th Florilege Vocal de Tours and 2008 Irish National Choir of the Year competitions, the 2009 Gaudeamus Music Prize shortlist, and the 2010 Música Viva Competition.

He is a founder member of the Spatial Music Collective and is an active performer, both of his own work and with The Spook of the Thirteenth Lock, Miriam Ingram, Nina Hynes/Dancing Suns, Chequerboard, among others. He has also worked as a producer/engineer for a variety of artists and groups such as the Crash Ensemble, Mumbling Deaf Ro, Somadrone, Conor Walsh and Daniel Figgis.

In 2010 he completed a PhD entitled The Composition and Performance of Spatial Music at Trinity College Dublin, where he now lectures. His research work includes spatial music composition and performance, the aesthetics of electroacoustic music, and the augmented electric guitar.

Scores and other material are available from his page at the Irish Contemporary Music Centre.

TRINITY 360 will be a new work of spatial music for multiple loudspeakers and performers, funded as part of the Trinity Creative initiative. The concert will feature many of the performing groups associated with Trinity, and will be presented as a large-scale live event in the Front Square of Trinity College Dublin in April 2016. This immersive live performance will also be filmed and recorded to create a 360 virtual reality presentation and surround sound recording of the event.