So, we have all the footage transferred from the (many) SD cards and backed up; we have about 660 Gb of audio and video material in total, so plenty to work with!

Here is a little timelapse video of François Pitié and Sean Dooney putting the final touches to our 360 camera rig before the concert.

We’ve just started working on stitching together and synchronizing our video footage from both the 360 camera rig, and the three 3D pairs (16 GoPros in total). Although others have reported occasional problems with the GoPro wifi remote and the odd corrupted file, we didn’t encounter any problems in that regard. We did find that the cameras would sometimes go immediately out of sync when started with the remote, however, this was always immediately noticeable (and very obvious) and could be easily fixed by stopping and starting record again. Of course, the GoPro wifi remote only ensures synchronization within a few frames and much more accurate time alignment is required to create the full 360 stitch. This synchronization is often done using the audio track captured by each individual GoPro, and while we also have this option, we did try a different method that looks promising. As well as the standard clapper board, we also used a camera flash to create a visual reference for the alignment measurements, and while much work needs to be done, this definitely looks like a viable approach which may potentially allow for more accurate alignment than audio alone.

We’ll be working on stitching the 360 video over the coming months, so we’ll have more technical details on that in the near future. In terms of the audio, we recorded the concert using three different main microphones, namely a MH Acoustics Eigenmike, a Core Sound TetraMic, and a Zoom H2n, as well as a number of mono spot microphones. One of the aspects of this recording I’ll be looking at in the coming months is the production process for combining these B-format recordings and spot microphones, however, we’ll also be comparing the relative performance of these three microphones, particularly when combined with the matching 360 video.

In the meantime, here are some photos of the concert (with thanks to François Pitié). 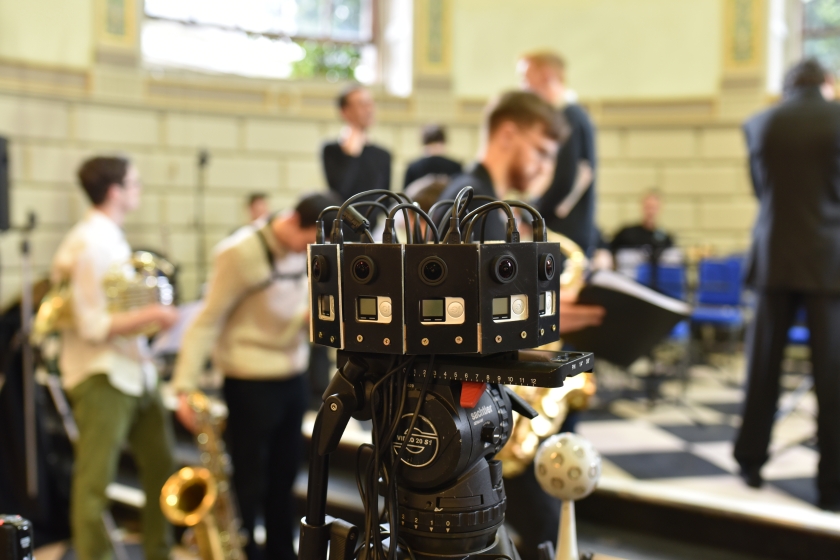 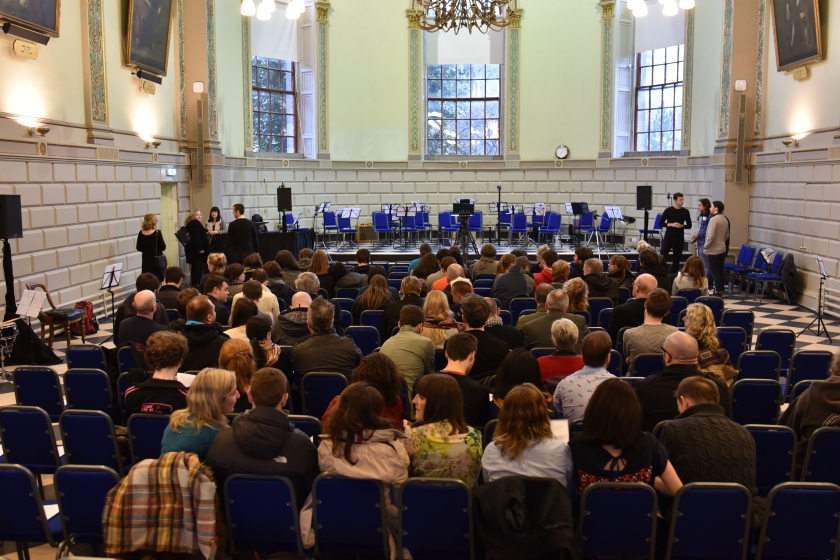 You also can hear the third movement of From Within, From Without at the Spatial Music Collective‘s programme at the Ideopreneurial Entrephonics II festival, this coming Saturday (April 23rd) at the Freemasons’ Hall, in Dublin. Also featured on the programme will be works by Jonathan Nangle, Brian Bridges, Massimo Davi, and others, and there are lots of other interesting performances and events happening over the course of the festival too.

You can hear a short excerpt of this soundscape composition entitled Of Town and Gown below, although of course this has been reduced to stereo from the original mix for eight loudspeakers.

Upon entering the campus of Trinity College Dublin it is striking how much the character of the ambient sound changes, as the din of traffic and pedestrians which dominates outside the college walls recedes into the background as you emerge from the narrow passageway of the front gate. This sense of liminality and of passing through a threshold into an entirely different space is the focus of this tape piece entitled Of Town and Gown. This soundscape composition is constructed from field recordings made around the outskirts of the campus, which are then manipulated, processed and combined with a sound from the heart of the university, namely the commons bell located in the campanile. In this way the piece explores the relationship between the university and the rest of the city (between town and gown) through the blending and relating of these different sounds from both inside and outside the college walls.

Finally, I would like to say thanks to a great many people who helped make the concert happen, in particular the wonderful performers of Trinity Orchestra, Cue Saxophone Quartet, Pedro López López, and Miriam Ingram, and also;

2 thoughts on “After the Concert”